An Explosion of Comments

Public comments on the FCC’s anti-net neutrality proceeding have exploded over the past week following an incisive pro-net neutrality rant from John Oliver on Sunday. The proceeding, which had accumulated about 39,000 public comments as of Saturday 5/7 at 8PM (prior to Oliver’s segment), has now seen more than 1.1 million comments as of Friday 5/12 at 8PM (just five days later)1:

Comments accumulated rapidly over the course of the week, peaking at a rate of over 44,000 comments per hour on Thursday2: 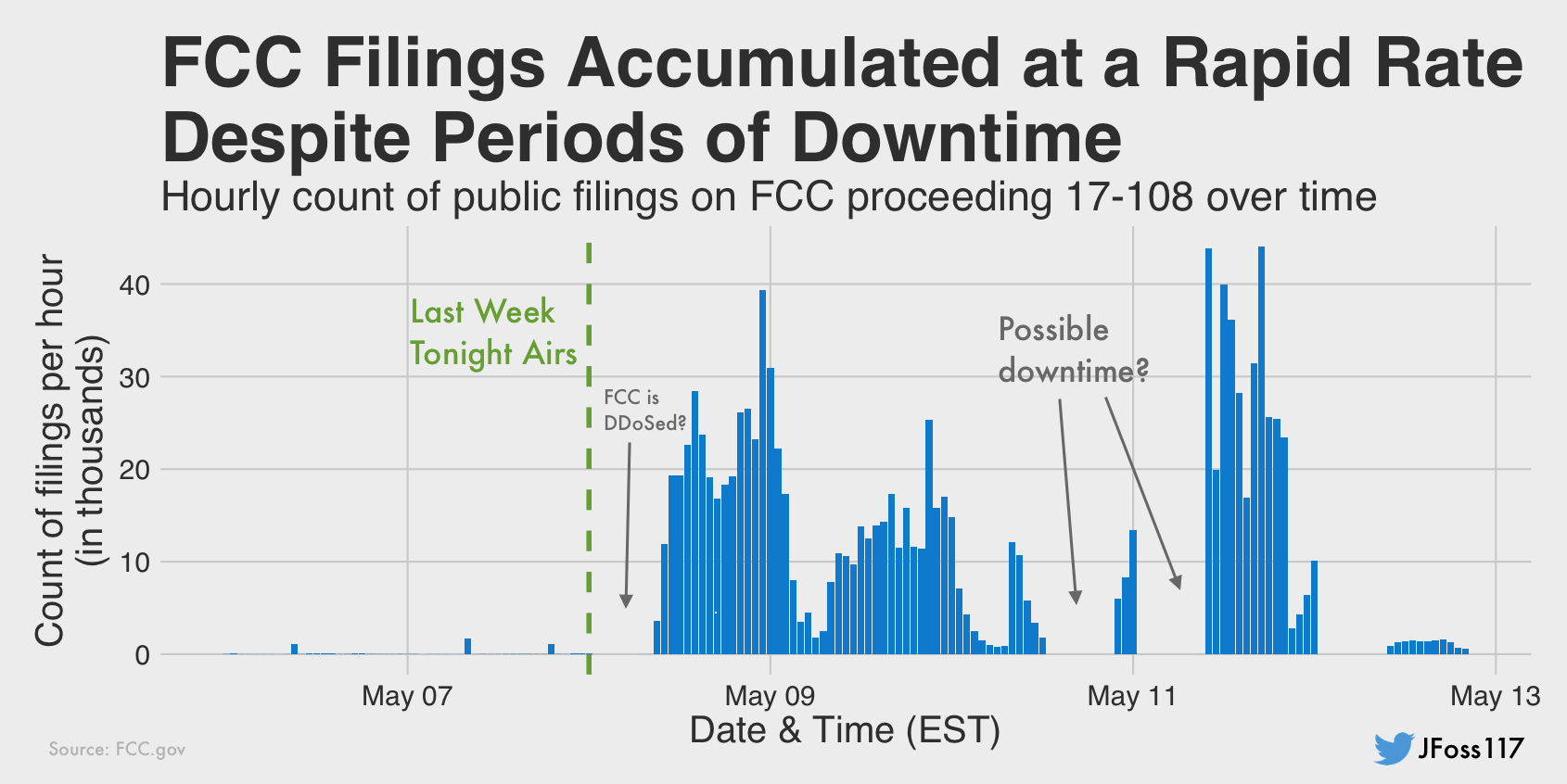 On this chart, the gap between Oliver’s segment concluding and the influx of comments is presumably due to site downtime that the FCC reported on Monday morning. The FCC claims that this downtime was driven by a malicious DDoS attack. However, the timing of the downtime relative to Oliver’s segment casts some doubt on this claim; as many have pointed out, an influx of requests & comments from Oliver’s audience could easily be mistaken for a DDoS attack. Two senators and one pro-net neutrality group has called on the FCC to release logs supporting the claim that they were DDoSed.

The chart also shows evidence of other periods of intermittent downtime throughout the week, as reported by pro-net neutrality group Fight for the Future.

Not long after Oliver’s segment aired, reports began to surface that FCC commenting had become a target of bots and spammers. What was the impact of these efforts? After some light text cleaning3, here are the top 10 most common free text filings:

Many of the top comments are variants of Oliver’s recommended comment supporting net neutrality backed by Title II oversight. This demonstrates that Oliver was likely an inspiration for many filings5.

However, most striking is that the top-submitted comment (“the unprecedented regulatory power…”6) has been filed over 440,000 times, including over 270,000 times on Thursday 5/11 alone: 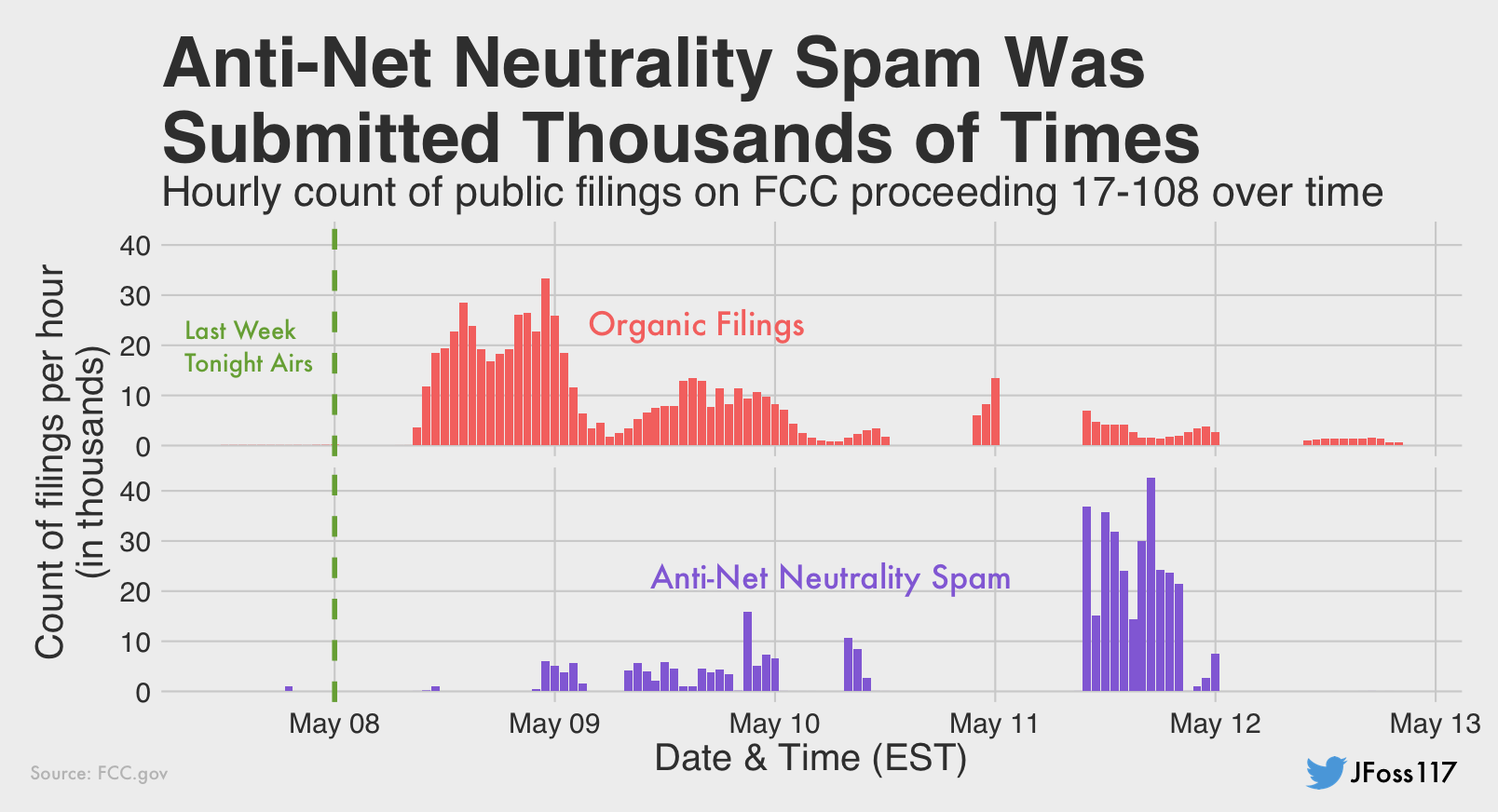 We can’t say for sure whether these submissions were due to a bot (see below); however, various reports suggest that there are reasons to believe that at least some share of them were. In particular, although the repeated (hereafter: “spam”) submissions include real names and addresses, a number of individuals whose names appear have denied submitting the comments.

Spam Comment Emails May Have Come From a Data Breach

Earlier this week, The Verge reported that the names and email addresses used in the fraudulent filings may have been pulled from a data breach of River City Media (RCM).

To further investigate this hypothesis, I randomly sampled 1000 filings that used the repeated text and queried the HaveIBeenPwned API to retrieve a list of known data breaches that the associated emails were involved in. I found that ~76% of emails associated with the repeated comment had been involved in at least one data breach, and ~66% were part of the RCM breach specifically:

This lends some support to the claim that many of the repeated comments are fraudulent. However, a few caveats are worth keeping in mind. First, the RCM breach is extremely large (1.4 billion records), and so the majority of any random list of emails might show up in the breach. Second, just because an email shows up on the RCM list doesn’t mean that the associated filing is bogus, given that we know that a conservative group called Center for Individual Freedom provided a form to its supporters that included the same spam text.

Supposing that the anti-net neutrality spam is all fraudulent, do most filings support or oppose net neutrality? To find out, I took a random sample of 200 comments from the pool of filings (excluding the repeated anti-NN comments) and hand-tagged the comments as “Supports net neutrality”, “Opposes net neutrality” or “Other”. The results show that the remaining comments overwhelming support net neutrality7: 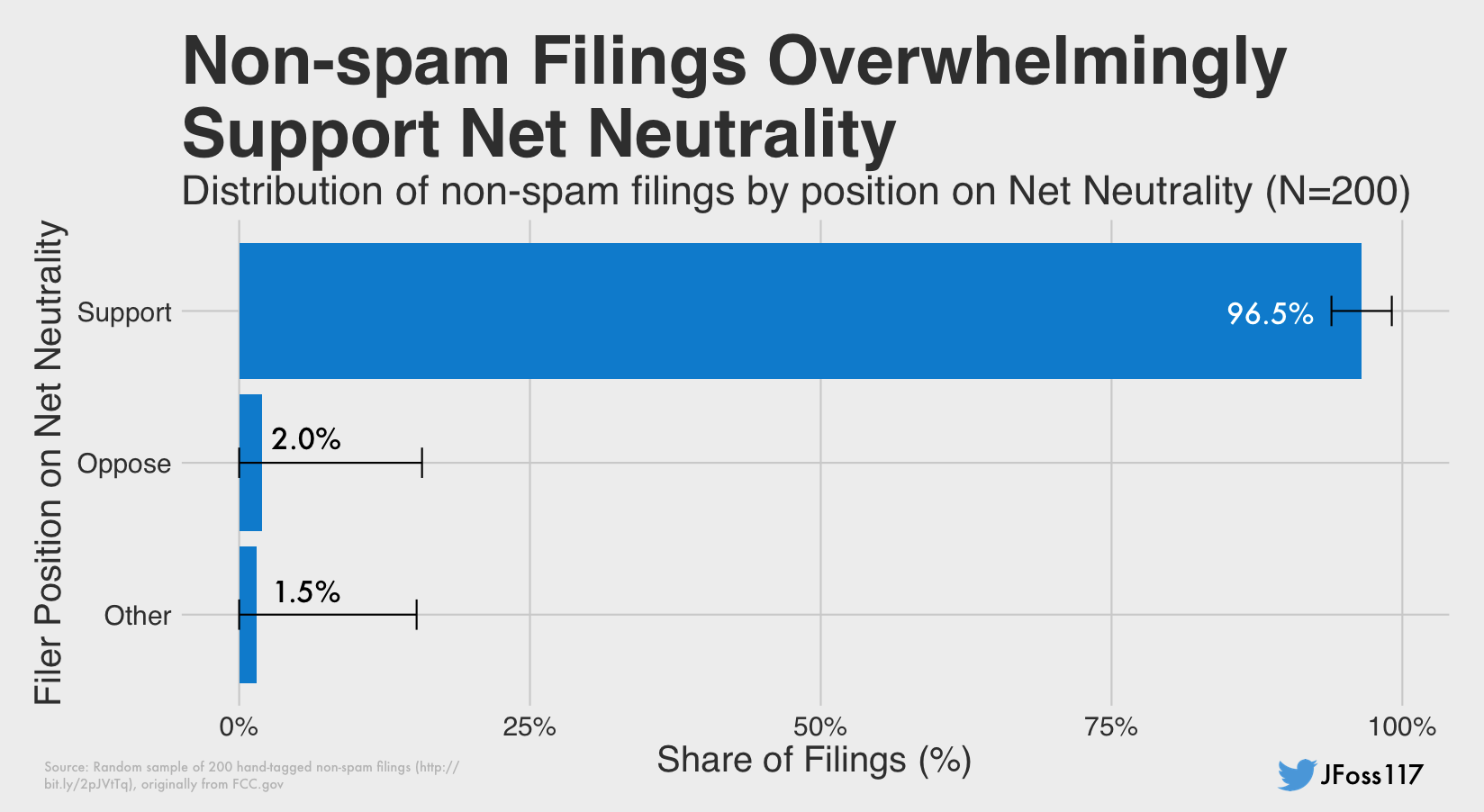 As noted above, we don’t know for sure whether the spam comments are (exclusively) fraudulent; however, even if the spam comments were all legitimate8, this analysis suggests that filings would still be in favor of net neutrality by roughly a 59-40 margin overall9. We also don’t know the extent or impact of possible botting / spamming on the pro-NN side, which could shift the balance of opinion as well.

The FCC Should Reconsider its Position on Net Neutrality

The FCC has now entered a “Sunshine” period for docket 17-108, during which it will not consider new comments. Given the magnitude of filings (~695,000 if you exclude the anti-NN spam) and the balance of opinion expressed (97% in favor of net neutrality or 59% if you include the spam), this analysis suggests that the FCC should reconsider its position on net neutrality during this period of reflection10.

EDIT: Did not expect this to blow up as much as it has! With that, wanted to highlight some important caveats to keep in mind when reading this post: (i) in this post I use the term “spam” to connote an identical bit of text that was repeatedly filed many times; importantly, we don’t know exactly what share of these “spam” comments are legitimate, though we do know that some are fabricated; (ii) there is some evidence of botting/spamming on the pro-NN side as well (though likely not to the same degree), which is not addressed in this post, and could shift conclusions. If anyone is interested to futher address these caveats, please let me know and I am happy to collaborate or share data.

EDIT 3: New analysis from the Daily Caller suggests that substantial pro-NN botting may have occurred as well (a point not addressed here). Please take a look!